As you probably have heard, Qaddafi has been captured and killed : http://www.nytimes.com/2011/10/21/world/africa/libyan-fighters-say-qaddafi-stronghold-has-fallen.html?_r=2&hp

I’ve noticed numerous responses to this news from idiots, that killing him will just allow the next dictator to step up and rule, so it’s pointless in killing him.  The fact of the matter is he needs to be punnished for his actions.  Killing a scumbag like him may not be an end-all, but does that mean we let him go unpunnished?  He should be punnished for what he did, not what might happen when the next leader steps in.  The only thing we can count on, is what HAS happened, not what MIGHT happen.

John Denver loved to sing, “This land is your land.  This land is my land.”  However, the “your” he referred to was other AMERICAN CITIZENS, not citizens of other countries.

Unfortunately, the PC police and Lieberals, along with President Obama, want even citizens of other countries, notably Muslims and Mexicans, to be able to tell US what we can do OR say!  This political correctness has gone so far that we can’t joke about Mohammed; but, it’s okay to defecate on the American flag and to use vulgarities when referring to anything Christian.  People who express their feelings publicly about homosexuality or other ethnic groups are portrayed as racists and somehow, subhuman. Athletes have even lost their jobs for expressing their honest opinions.

And, now, certain ethnic groups feel they  have the right to tell us what to  WEAR in our OWN COUNTRY!

Freedom of expression or cultural disrespect on Cinco de Mayo?

Where does all this nonsense end?  Do we Americans have to let someone else dictate the laws of our own country? Whose land is America?

I say it’s  time to stop pandering to minorities, especially those who are NOT citizens;  and remember,  that in America, the majority–OF AMERICAN CITIZENS, NOT ANYONE ELSE —  is supposed to rule!

The majority of Americans are still Christians.  So, let’s stop letting one or two atheists decide what we can say or do in public.

The majority of Americans are against illegal immigration, especially any attempt to legalize those who are here illegally now.  Let’s require EVERYONE, not just Mexicans, to go through the exact same procedure to see if they qualify to be American citizens.

And, let’s stop worrying about “offending”  minorities. It’s time for minorities to grow up and understand that everyone is offended by something that others do. GET OVER IT!  The rest of us have.  After all, the Constitution guarantees the right to PURSUE HAPPINESS AND  LIBERTY, not a guarantee that any of us will be given a special pass to that happiness.

And, let’s take back this wonderful country that is OURS.  Then, once again, this land will truly be YOURS and MINE!

If you’ve been under a rock and don’t know about the White House dinner story, Read This! Personally, I think the stunt / gag was pretty funny.

Here’s where the media rears its ugly head. Had this been President Bush in the White House the press would have a field day talking about the administration’s incompetence. Instead, the lieberal media comes to Obama’s defense and claims the stunt was wrong and charges be flung at the couple like candy. Had this been with the Bush administration, the media would be lauding the couple for sticking it to President Bush. It’s this double standard in the media I think shows a clear cut example of how bat-shit insane they are.

Another example is the Tiger Woods story. First of all, everyone and their brother are making assumptions and throwing out opinions as on national tv. It’s ok if you want to throw out opinion in the safety of your home, but when you’re in a public forum you can’t decide what the facts are on his personal life or what may have happened. Then watching the Sports Reporters Sunday, Mike Lupica made note that they deserve to know all the details as to where he was going and why, so that they may correctly determine what happened. Until it’s public record, he and everyone else have no right to know what went down.

Maybe Tiger just lost control of his car, maybe there was some personal issues or maybe he was trying to run over a nosy reporter.

If it’s the third option, let’s hope there’s more like him. 🙂

When President Bush was called Hitler and other vicious names on the House floor, the Democrats encouraged them. When Joe Wilson rebukes Obama for an erroneous statement, the Democrats censure him.

When other countries insulted us, our system, and demanded MORE MONEY, the Democrats said nothing.  When Russia decides to give nuclear weapons to Venezuela, they sit on their hands.

So, when the President made his comment, so obviously wrong at that time, someone from his own party should have called him on it.  But, the Democrats are afraid to be out of lock step with Pelosi and Reid, so they waited for someone else to reprove the President.  That person was Joe Wilson.

Coach Lombardi coached the Green Bay Packers from 1959-1967.  He CHOSE to retire, but a year later, he CHOSE to coach the Washington Redskins.

Result?  The Super Bowl trophy is named after Coach Lombardi.

Coach Holmgren coached the Green Bay Packers from 1992 to 1998.  He CHOSE to leave the Packers and he CHOSE to coach the Seahawks.

Result?  A Green Bay street is named after Coach Holmgren.

Quarterback Bret Favre played for the Packers from 1992 to 2007…bringing them many victories and even a Super Bowl title.  He WANTED to play for the Packers forever, but THEY REFUSED TO LET HIM.  So, in order to play football, he had to go to another team.  This time, the Minnesota Vikings CHOSE Favre!

Result?  Favre is villified by some Green Bay fans and media.

Can anyone see the hypocrisy of criticizing a man who just wants to play football?  I can.  I say, “Good luck , Favre!”

Why did the reporters not stand for President Bush, but stood and wagged their tails when President Obama walked in?

One of the sties I freqeuent is www.xkcd.com, and I found this cartoon especially interesting. 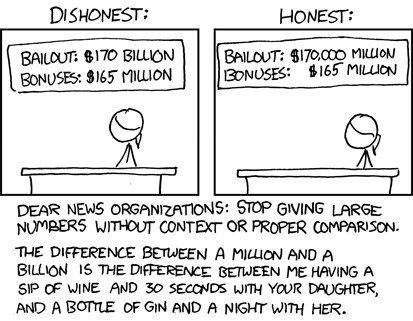 While I’m in no way agreeing with all the bonuses, I just found it interesting how the media coerces us into seeing something totally different.

On a side note, Mr. Knowledge is back and willing to continue his posting habits.

No wonder Lieberals all sound alike!

What do all these have in common?

Well, if you agree with the Lieberal media, you believe that President Bush is to blame for all of them.    Yes, that is how ridiculous the media’s preoccupation with destroying President Bush has become.  Any disaster, no matter the genesis, automatically is laid at the current administration’s door.

The New Orleans hurricane and its subsequently poor  response were all attributed to Bush, despite his immediate eagerness to provide Federal help which the governor and mayor of those areas initially refused!!   The problems in Africa with genocide and AIDS still are blamed on Bush even though he has provided more American funds to fight AIDS than any of his predecessors.  This week, in an amazing leap of chutpah, the NYTimes reports that Bush’s policies were the genesis of the housing crisis despite Bush’s attempts to rein in the poorly regulated Fannie and Freddie.

It is very human to want to find a scapegoat for problems rather than to lay the blame where it belongs.  What I find truly amazing, though, is the immediate and zealous condemnation by  almost all the media to blame President Bush.  It would be better if they looked to the Democrats whose governor and mayor refused Federal help when the hurricane struck.  Or, maybe blame the Democrats who ignore the AIDS crisis in Africa while demanding money for all kinds of pork barrel spending.  And, yes, it was Democrats like Dowd, and his ilk, who prevented any kind of increased scrutiny on Fannie and Freddie when it became obvious that these institutions were funding insupportable home loans.

We will always have natural and man-made disasters…many man-made fiascos  if we continue to ignore the excesses of our legislators.  There will be a price to pay and I sincerely hope that those who truly created many of these problems will pay the price.  In fact, my holiday wish for those people who use their elected positions to further their own financial status is this:  a pox on your house.  And may your greed be rewarded with  hurricanes, pestilence, boils and lesions!